Built on experience gained with the highly successful Vertex mains and speaker connections, the Quiescent range brings even higher performance, easier installation and flexibility in changing cables and locations.

For both mains and loudspeaker connections (see below) most of the key vibration and EMI/RFI absorption is carried out by the Peak Modules, with contributions by the cables. This gives you the choice of using Peak cables or your existing ones, fitted with Powercon connectors, and the ability to upgrade in stages. A simple A/B comparison between existing cables and the Peak system shows how much damage is caused to the music signal by vibration and EMI/RFI – go to Vertex and see the side bar.

Separating the cables from the modules gives you complete flexibility over your choice of cable and lengths if circumstances change – if upgrading or moving house you keep the investment in the module.

with the Quiescent cables that complete the pure silver connection from input to output (see specification below).

An ideal starting point for any system is this distribution block which works on exactly the same principles as the Peak blocks, in absorbing vibration and RFI, but at a simpler level. 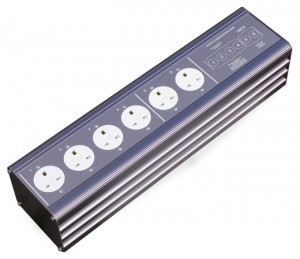 Quiescent Balanced Power Distribution Block with separate supplies for source components and power amplifiers. It can also be supplied with Continental Schuko sockets.

The benefit of balanced power is greatly reduced noise interference with delicate signals early in the system, known as “Common Mode Noise Rejection”.

Crucially the block does NOT limit power in any way for the two amplifier sockets – they connect directly to the IEC input and filtration takes place “on the side”, shunt filtration, see below. This distribution block avoids regeneration, which may sound attractive but it involves processing the mains through circuitry with chips that can introduce glitches – read more here  and scroll down.

For the ultimate in delivering clean mains to a whole system: 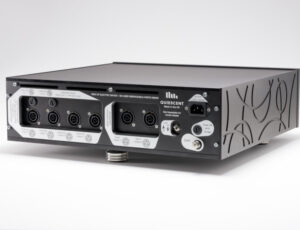 Balanced power operates on the same principle as balanced audio circuits, offering Common Mode Rejection in which interference picked up on one line is cancelled by out-of-phase interference on a parallel line. The benefits in terms of clarity, life, realism and dynamics are startling.

Up to 700W of balanced power is available for four source components – streamers, CD transports and DACs, phono stages and preamps – while a further two sockets are connected directly to the mains input for 1500W of unrestricted and shunt-filtered supplies (see below) for power amplifiers.

All output sockets are isolated from one another, to prevent any one component that’s drawing power to pollute supplies to others – NB All mains-powered items – amplifiers, CD players, washing machines, LED lights – put pollution back onto the mains. Does your system sound better in the evening when many items are turned off?

DC on the domestic mains is very common, causing transformers cores to saturate which limits their delivery capacity, and sometimes to buzz. DC blocking is therefore built in.

Like other major components in the Quiescent stable, such as the Streamer, the top panel is made of composite material not metal, which breaks the circuit and prevents induced magnetic fields from circulating around the casework and creating interference internally.

It does not limit power delivery. Housed in the same low-resonance case as the other mains modules, the Peak Shunt filter is yet another big step up in performance over the Vertex HiRez Jaya, with obvious gains in information across the board – presence, imaging, clarity, timing – all the aspects we seek in an upgrade. 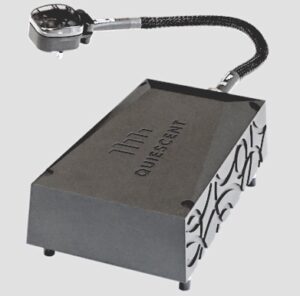 Some mains filters and regenerators have components  such as diodes and chokes in the line, between input and output. These can limit peak current delivery during demanding music passages, causing electronics, and especially amplifiers, to lose energy and sound flat and uninvolving.  If dynamics suffer music loses its excitement at the critical moments.

As its name suggests the Peak Mains Shunt sidelines  pollution, to earth, with no effect on power delivery. In fact dynamics are likely to improve as the EMI/RFI absorption removes pollution that intermodulates with the signal and destroys information. The Shunt works well with the other Quiescent mains modules, each complementing the other to raise performance even further.

In use the Shunt is simply plugged into an available socket, either alongside the system or sometimes even more effectively in another socket on the same ring main supply. We often find that placing the Shunt on a distribution block between two “noisy” items, such as a power supply or a digital Clock, can bring valuable improvements.

“Grounding” for a blacker background

Feedback from customers using this module to ground electrical noise in music systems shows they are hearing a great increase in fine detail that creates realism and “presence”, a bigger soundstage, a sweeter top end and a much quieter background.
This is especially important in systems streaming music – from the internet, computers or storage devices – because digital signals are especially vulnerable.

For absorbing very high frequency electrical “noise” this Quiescent Grounding Block is proving that just one is more effective than two or more of its competitors on the market. 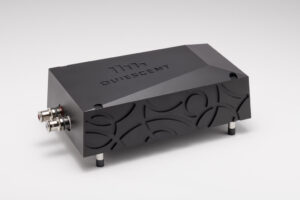 In any digital music circuitry this noise is especially damaging  because it interacts with the high speed processing fundamental to digital replay.

In standard circuit design electrical noise from power supplies and boards is earthed to a ground that is common to the whole system – meaning that the whole system “hears” this noise. Ground should be a 0V reference point for the system’s power supply, but when it’s carrying a voltage varying at very high speed the music signal becomes polluted, audibly.
Vertex AQ, the predecessor to Quiescent, launched their Pico product in 2013 when they recognised the damage being caused. This Grounding Block is a much improved successor, containing Quiescent’s patented technology. The shaped design and scrolling on the case help to limit reflections and resonance.
The Grounding Block has a special design feature for complex high-end systems: by bridging the binding posts and connecting to just one vulnerable component there’s another jump in performance as RF noise in the high GHz regions is absorbed.
The Grounding Block costs £1995 and highly-absorbent complementary cables are £300-£400, depending on length.

Chosen by hifi+ magazine as ‘Accessory of the year’ December ’21

Exactly the same principles and performance gains apply to the loudspeaker blocks, in this case sitting between the amplifier and the speakers.

‘– I never knew there was so much noise in the amplifier/speaker chain’ said a delighted customer. 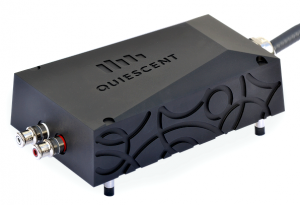 Peak Loudspeaker Module, massive absorption capacity to protect the system from speaker vibration. Connect speaker cables to the terminals and the flying lead to either amplifier or loudspeaker, whichever is convenient.

Loudspeakers are, by design, giant vibrators at all audio frequencies as the cones move forward to push energy into the air. However as they move back 50% of their energy is left in the cabinet.

Some will be absorbed by cabinet material and internal damping but a substantial proportion will be exported through the crossover and out via the metal connecting cables, excellent mechanical conductors, into the amplifier and of course, from there throughout the entire system along the interconnects.

Modules are supplied with a 0.5m or 1m Quiescent Silver cable.

Connect to the Block with your existing speaker cables or the Quiescent Apex or Peak cables and place the Block at either the amplifier or the loudspeaker end of the link, whichever is more convenient. We have found in many cases that placed at the amplifier end can be beneficial, depending a lot on materials and construction.

Quiescent is a new audio company, drawing on technology to optimise system performance developed by Vertex AQ 0ver more than 20 years. Quiescent’s capabilities draw together a potent set of technologies and experience, from aeronautical engineering and electronics, corporate-level software design and global distribution.

Building electronics from their own designs Quiescent is able to apply Vertex technology right inside the circuits, at the most vulnerable points, limiting damage from vibration and RFI and EMI interference from spreading within the component.

The results are new hifi components that out-perform everything you have ever heard. These are revolutionary in every way, for products well beyond their price bracket.

Cables, also drawing on Vertex expertise, provide higher performance at lower prices and give greater flexibility by separating the absorption modules from the cables.